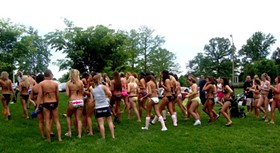 We're a bit late getting to this story, but the facts are these:

Fact #1: The Guinness World Record for "Largest Bikini Parade" was set last November in Johannesburg, South Africa. No less than 287 women traipsed around in two-pieces.

Fact #2: A brave attempt to break that record was made last weekend in St. Louis' Forest Park. .

The Tan Company, based in Fenton, was only able to muster 65 bikini-wearers to brave the overcast and drizzly skies on Saturday afternoon for the promotion, company spokesperson Stephanie Steruckhoff tells Daily RFT.

KMOX.com reported that a representative of Guinness even came from New York City to verify the final number, which again was 65 "people," not "girls," because four dudes showed up.

"It was pretty interesting," she says.

The Tan Co. also gave out tens of thousands in prizes. Part of the grand prize was a $5,500 boob job.