Will Leitch on Steve Bartman 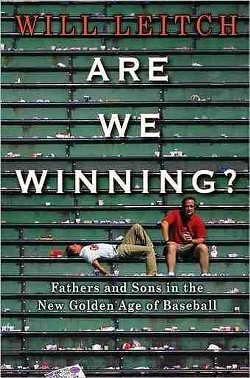 Will Leitch, hero of pithy internet sportswriters everywhere and close personal(ish) friend of mine, has an excerpt up from his new book over at his old stomping grounds Deadspin.
The book is "Are We Winning?" It's a collection of essays and stories by Leitch about fathers and sons and baseball. And it's by Will Leitch. So go buy it already, stupid.
Okay, sorry. I shouldn't have called you stupid. Maybe I got a little carried away. Still, you need to go buy it because it's probably the best thing ever. You don't believe me? Name one thing better. Nope, this is better.
In the meantime, head on over to Deadspin and read about the unluckiest Cub fan who has ever lived.
I say he's the unluckiest Cub fan who's ever lived, and I mean that. And let's face it; saying someone is an extraordinarily unlucky Cub fan is like singling out one member of the Lohan family as The Crazy One. Steve Bartman is unlucky in a way I'm not all that well acquainted with.

We've all seen the videos thousands of times, and probably at least a few of us have even laughed at it. I know it's still a little funny to me, even all these years later, watching Moises Alou jump and stomp and flail around like an angry child after some guy in the stands dared to try and catch a baseball hit two foot from him. It's one of those odd moments in life, when you can see something incredibly, tragically sad happening at the exact same time as something incredibly funny. (It probably doesn't help that I despise Moises Alou as much as any player of the past fifteen years. Don't ask me why; I don't have a good reason. I just do.)
But make no mistake: Steve Bartman himself is a tragic figure, a man caught in the wrong place at the wrong time and then crushed under the weight of nearly a century's worth of pent-up frustration from an entire city.
Leitch says it all much better than I can. I'll let him tell the story.
Oh, and I'm serious. Buy his book, stupid.