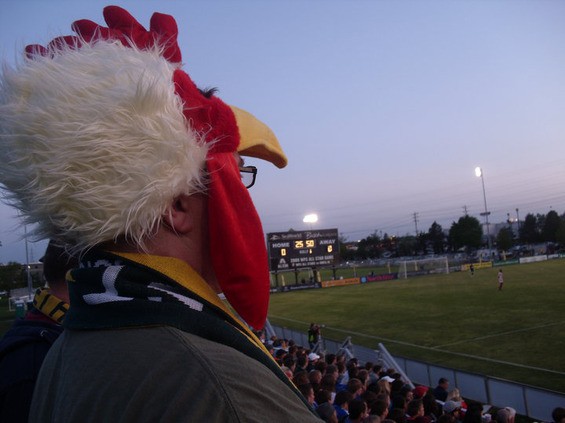 Moreover, did you know that "chickenhead" is vulgar slang for someone who fancies a certain sex act? We didn't until someone sent us this link from Urban Dictionary.

Daily RFT: When and why did you start the Chickenhead club?

DeMunbrun: I don't really know if you'd call it a club. Some friends and I were really happy that St. Louis finally got a Soccer team. We'd followed the trials and tribulations of trying to get an MLS franchise and when that fell through we were pretty devastated. When it was announced that Jeff Cooper was bringing an NASL Division II team to town we were thrilled and several of us bought season tickets.

Why the name "chickenhead"?

We knew the first game was going to be a packed house and that it was gonna be a party. I saw an old chicken Halloween mask in the basement on my way to meet up with my friends and thought it would be fun to wear. When we got to soccer park I almost left it in the car, but thought "what the hell" and wore it into the game. Lots of people were laughing about it and it was all in good fun, but then people started to chant "Chickenhead". By the end of the night people were asking to have their picture taken with me and calling me Chickenhead. The next day we started the facebook fan page. 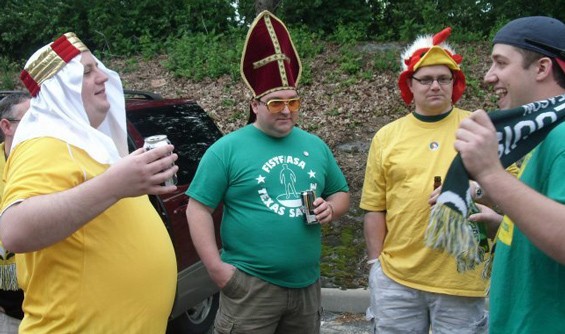 Did you consider changing the name after you discovered the alternative meaning of "chickenhead"?

There was some talk of changing the name to "chicken" like the San Diego Chicken mascot. But people had chanted "chickenhead" and were calling me Chickenhead. We thought screw it. Lets stick with "Chickenhead".

Is AC St. Louis on board with you and your fan site, and have they said anything about the name?

I know several players and members of the AC St. Louis staff are "fans" on facebook. Nothing really has been said about the other meaning of chickenhead. I don't really thing its a big deal, but if it becomes an issue and we'll work something out.