May 05, 2010 at 2:36 PM
comment
So much for tasering fans presenting an effective deterrent, eh?
For the second night in a row, a fan ran onto the field at Philadelphia's Citizens Bank Ballpark while the Cardinals and Phillies were playing, this time in the ninth inning of a game the Phillies eventually won in 10 innings, 2-1. This time the fan was not tased, and was apprehended rather quickly. Still, it's interesting someone would voluntarily run out on to the field the very next night after seeing how the previous incident was handled.
I suppose the chance to be booed by 45,000 people is just too powerful a temptation for a mere taser gun to overcome. Clearly, the kid from Monday night should have been executed on the field. That would have shown everyone that trespassing and disorderly conduct is no joke.

What I find particularly fascinating about this whole debate is the approach the Philadelphia Police have taken in defending the officer involved in the tasing incident. Police spokesman Frank Vanore said yesterday that Commissioner Charles Ramsey was in the process of reviewing video and various reports on the incident, and had initially concluded the officer was within accepted guidelines for the use of the taser. 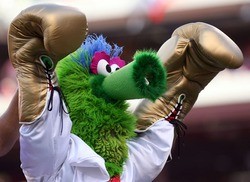 Lt. Vanore stated in the press conference that the department's policy allows the use of the stun gun in subduing individuals who are resisting arrest, adding that there will be an internal affairs investigation into both the policy regarding the use of tasers and whether the presence of police officers at sporting events is appropriate or not.
"Should we be on the field at all? I think that's what's being looked at," Vanore said. "I'm not sure we should be chasing people around the field."
Now this is where I begin to really question the direction this whole thing is taking. The police department is defending the use of force up to and including the deployment of a stun gun against someone who runs on the field, but at the same time wants to distance themselves and may not think it's appropriate for officers to be helping with security on the field at all. You can't have it both ways. The only ground the Philadelphia PD seems to be avoiding is the middle, where police certainly have a place at the game, but just tackle stupid dudes running on the field, rather than lighting them up with a tases. Seems to me it was abundantly clear the kid was no threat; he was, however, much quicker than the security personnel.
I'm not sure exactly where Commissioner Pilate, er, Ramsey, is going to go with all of this, or how the internal affairs probe is going to turn out, but I do know this: if only one of the two guys who ran on the field could have gotten tased, the police definitely picked the wrong guy. The guy who ran out last night deserved a good cattle prodding for the way he was dressed alone.