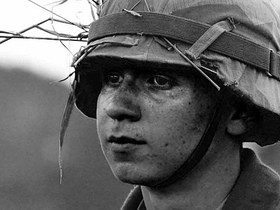 Which would YOU choose: two Class D felonies on your record, or three years active duty in the armed forces?

That was the choice given to five young dudes in Nixa recently. And according to a story in the News-Leader, all but one have chosen to remain civilians.

In the first half of 2009, the group of 17-and-18-year-olds -- Dustin Cleek, Coleman Walker, Andrew Bagwell, James Bagwell and Josiah Babin -- went on a vandalism spree that caused $12,600 worth of damage.

Given our nation's lethal entanglements in Iraq and Afghanistan, you might view their choice as an easy one. But Steve Meier, attorney for two of the boys, points out to Daily RFT that the felony convictions do have their consequences in Missouri:

Because they've all pleaded guilty, each will have to serve 10 days in jail, perform 500 hours of community service and pay full restitution.

But Cleek, who chose the military option, will serve only two years probation, while the others serve five. And that's only if he manages to get a waiver of his misdemeanor convictions, says Meier, which is not a sure thing.