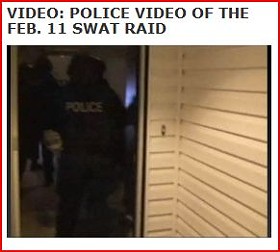 "DID YOU SHOOT MY F&%ING DOG?" the man cries out in the video, pinned to wall by an officer. "OH MY GOD! WHAT THE F&%K DID YOU DO THAT FOR!"

Yes, another cop-shoots-dog story, this one from Columbia (click here for yesterday's story).

Police there raided the home of 25-year-old Jonathan E. Whitworth back in February, thinking he had a big ol' stash of Mary Jane, according to the Columbia Daily Tribune. He did not.

In fact, all he had was a wee bit of pot, a grinder and a pipe. (His wife and child were there.) He has since pleaded guilty to misdemeanor possession of paraphernalia charges. But had something else in the house that night: a corgi and a pit bull that seemed "aggressive." Police killed the pit bull and wounded the corgi.

Dog-lovers, you might not want to click on this link: theTrib has uploaded a video of the raid, in which you can hear a dog squealing in pain.

Whitworth is reportedly considering suing the police for their actions. The police are saying they think protocol was followed. The matter is being reviewed internally, as is every incident in which a weapon is fired by officers.