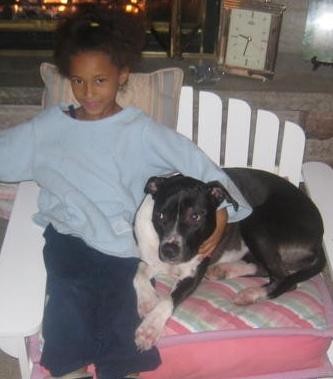 Billie Alvarez was on her back patio eating breakfast the morning of Friday, April 16, when a man dressed in all black jumped out from behind a tree. Her dog, Jade, a two-year-old terrier mix, woke up from a nap and sauntered over to the man.

"Her tail was wagging and she was smiling at him," recounts Alvarez, who says the man soon identified himself as a cop with the north St. Louis County suburb of Bellefontaine Neighbors. He said he was investigating a report of a vicious dog on the loose.

Within seconds Alvarez says the officer squeezed the trigger dispensing a round from his department issued .40 caliber Glock right between Jade's eyes. The bullet exited though the canine's neck.

"I couldn't believe it," continues Alvarez, who says she attempted to grab Jade moments before the shooting but fell to the ground when her newly reconstructed knees buckled. "I had knee replacement surgery in January. I was lying on the ground wailing, and he just shot her. Just like that. My seven-year-old daughter was home sick that day and came running out to see her dog dying in the backyard. That dog was her baby -- and mine."

Alvarez admits that Jade looked similar to a pit bull, but said the dog was not such breed. "She was trained as a service animal," she says.

Following the shooting, the 57-year-old Alvarez called her husband who rushed home from work and took Jade -- still clinging to life -- to the veterinarian where the dog was euthanized. Meanwhile, Alvarez says other officers with the Bellefontaine Neighbors police force arrived on the scene, with a few of them offering condolences.

Still, more than two weeks later, Alvarez says she's never gotten an official apology from the department, moreover she says they've failed to fully investigate the incident. "I went to the station and they said the investigation was closed, the officer was justified. They'd never even asked me my side of the story."

"We feel horrible about it," says Pruett, who adds that the investigation is still open. "We had been waiting for her statement and finally received it last week."

Pruett says that the next door neighbor had complained several times about the Alvarezes and their three dogs roaming the neighborhood and the cemetery behind the houses.

"The dogs need to be in a fenced yard or on a leash," he says. "And that wasn't the case here. Our officer says the dog was charging at him, she says something different. The point is, we have dog ordinances to protect both parties."

Alvarez says she has an electric fence for the dogs that is broken. Still, she argues that Jade was on her lawn when the officer drew his weapon, and never came within three feet of him.

"I just don't understand how someone can come onto your property and shoot your dog," she says. In addition to demanding an internal affairs investigation of the officer who shot Jade, Alvarez is now asking St. Louis County prosecutor Bob McCulloch to look into the incident.

"Our whole family has been devastated by this," says Alvarez, who with her husband, raises three adopted girls (all sisters) ages 7, 11 and 13. "It's hard for us to be home. There's too many memories here of Jade. She was the sweetest animal you ever met. And now she's gone."