Wash. U. Prof Joins Obama and Lady Gaga on Time's Most Influential List 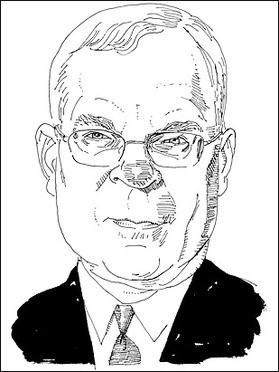 Although, according to various stupid media-generated lists, St. Louisans/Missourians are ugly and stressed and spend too much time sitting in traffic and have few job prospects, we now have one thing to be proud of. Or, rather, one person. Washington University professor Michael Sherraden has been anointed one of Time magazine's 100 Most Influential People.

Yes, that Time magazine. Sherraden will henceforth be forever linked with President Obama, Scott Brown, Glenn Beck, Oprah Winfrey and Lady Gaga. "Influence" apparently does not necessarily mean always using one's power for good, though Sherraden does operate on the more altruistic end of the scale.

Sherraden teaches at the Brown School of Social Work and is the director of the school's Center for Social Development. He is also a co-founder of the Global Assets Project, a foundation that seeks to help impoverished people in underdeveloped countries accumulate the sort of financial assets that most people in the U.S. take for granted: savings accounts, investment plans, retirement funds.

Writes Time in its citation:

Through this project, Sherraden, 61, a professor of social development at Washington University in St. Louis, Mo., is working to fulfill an ambitious vision: helping poor families accumulate sufficient funds to ride out hard times, buy the crop insurance that protects against drought and blight, insure homes so they can have not only a place to live but also the municipal services that come with a fixed address. He seeks a world in which success is a function of determination and merit, not privilege or political favor.

"Oh, that sounds very odd," Sherraden told St. Louis Public Radio when reporter Maria Altman asked him how it felt to be an influential person. "I think there could be thousands of people who could deserve to be on such a list, so it's a little bit arbitrary, but I'm glad to be on the list."

Sherraden has done considerable work within the U.S. as well. He has proposed legislation in Congress to provide every newborn child with a savings account under the assumption, borne out by his research, that a young person with savings is more likely to go to college. The legislation has not actually become a bill yet, but Sherraden told St. Louis Public Radio that he's received lots of support from both Republicans and Democrats.