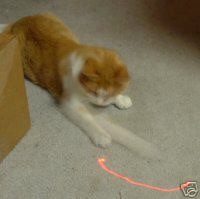 The Post-Dispatch has an interesting article today about a 21-year-old man arrested Tuesday night for shooting a laser pointer at a St. Louis County Police helicopter.

According to the paper, the man was sitting in a parked vehicle around 9:30 p.m. when he spotted the helicopter flying 700 feet overhead and aimed the laser pointer at the aircraft. The green light so alarmed the pilot that he radioed into his colleagues on the ground who located the vehicle and arrested the man on suspicion of interfering with an aircraft.

"I don't think people realize how dangerous it is that you're temporarily blinding a pilot," the 'copter pilot tells the daily. "It hits you directly in your eyes."

My question(s): How far can those laser pointers shoot? And could they really distract someone 700 feet away?

Apparently the answers are yes, yes.

According to at least one vendor of commercial laser pointers, the devices can have a range of 100 miles. And, as the Post-Dispatch reports, the Federal Aviation Administration says laser pointers are a growing problem with pilots lodging 1,476 complaints about them last year compared to just 283 in 2005.