It's the Ladue Yacht Club, Dahling!

You may have noticed that there aren't many bodies of water in Ladue, unless you count in-ground swimming pools and golf course water hazards. But that doesn't mean that the Ladue shouldn't have the same amenities of other towns where people are rich and get drunk together.

Now, thanks to some clever Web development, Laduvians abroad can hold up their heads when they meet their peers from Lake Forest, Greenwich and Palm Beach. "Why, yes," they can say, "we do belong to the yacht club." Thank God for the Ladue Yacht Club!

The brilliance of this is that although the physical club is not accessible to mere mortals who cannot pass through the club's rigorous screening process, anybody with a Facebook account (that is, anybody) can sign up as a member and get a special yacht club name. (Tipsy Selma Haughti here!) 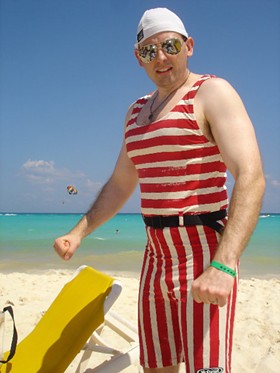 But the Ladue Yacht Club is no mere upstart. According to its Uncylcopedia page, it was founded in 1946 by yacht magnate Captain Tanner "Salt" Prescott who, after making his fortune returned to Ladue to nurse his dying father. To ease his homesickness for the sea, he built a private lake in the center of Ladue.

Gradually, the area surrounding the lake developed into the Prescott Sails neighborhood, consisting of nine palatial estates, each with its own yacht, boathouse, dock and cabin boy.

What? you say. How come I have never heard of this place? How come it has never been featured in the pages of Alive magazine?

It's because Prescott Sails is as cleverly concealed from prying eyes as Hogwarts:

The man-made Ladue lake is well hidden. A genetically altered algae which grows like grass on top of the lake, hides the lake from aerial photos. Rumor is that the entrance of the neighborhood appears to be a private gated driveway that includes a decoy home which is actually the offices for the Ladue Yacht Club.

The Ladue Yacht Club has no rivals in the St. Louis area, as far as it knows. U.S. Representative Russ Carnahan does have a yacht, but he prefers to dock it on the Illinois side of the river because taxes are less. As for its neighbors,

People from Chesterfield, Clayton, Wildwood and Frontenac are seen as low income undesirables. Other cities are not worth mentioning. The club is afraid that people from Wildwood will start moving into Ladue. Ladue Yacht Club blames the economy on those cities - the recent rash of foreclosures in the area is almost exclusively linked to Chesterfield and Wildwood residents trying to artificially better themselves.

This weekend Ladue Yacht Club members will be traveling to the Kentucky Derby on a private plane that takes off from their special, secret airport. (They had to build it because the county denied them the permits to build a ten-mile bridge over the entire town of St. Ann.) When they return, presumably they will begin hiring deck and dockhands. All residents of Chesterfield, say the club's leaders, are warmly welcomed to apply.