The End of BYOB at Busch Stadium? 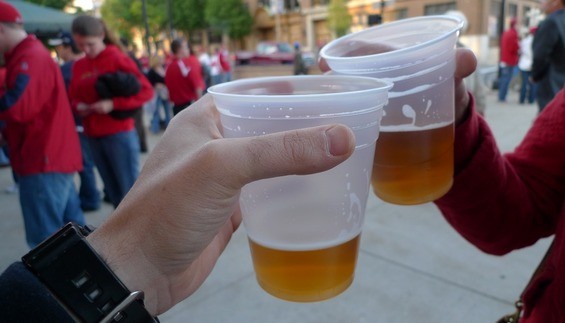 "I guess they were selling beers at Paddy O's for $5," he explained. "A lot people were leaving the stadium to get them and coming back inside."

Another couple that hitched a ride in the same van as us said that gates along Clark Ave still allow beer in cups through the turnstiles. We asked and the stadium worker said and he didn't know anything about that. With the first pitch just minutes away, we finished off our drinks on the sidewalk and hustled to our seats.

A quick search on the Cardinals' website shows that the outside alcohol policy is clearly spelled out -- bring in almost all the outside food and drink you like but leave the booze at home:

Apparently they used to let the cups slide (sort of like the police give a free pass on open containers on the sidewalk outside the stadium) but had to crack down when it started costing them money. It's not surprising, but definitely disheartening, especially when it came time to fork over sixteen bucks for two plastic bottles of Bud Select.