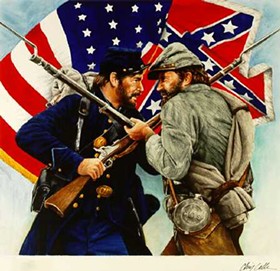 An interactive exhibit soon to open at the National Archives in our nation's capital will be spotlighting a rather dark event that occurred in St. Louis during the Civil War. (Check out this morning's story in The Washington Post)

The year was 1864. Six Confederate POWs being held at a prison here in the city were lined up at fifteen paces away and shot through the heart, dying instantly. It was retaliation for the execution of six Union soldier prisoners (plus one Major) a few weeks earlier, elsewhere in Missouri.

The Union was going to blast a a rebel Major too, but President Lincoln sent a letter forbidding it.

The WP's article quotes a senior curator at the Archives describing this new, document-rich exhibit as a sort of "guided research experience" that transports people to some little-known corners of the war's history.


"It struck me as not the way I remembered the Civil War growing up, which is generally pictured as great armies clashing on a battlefield like Gettysburg."

Glad we could be a part of it.