I don't make it a habit of listening to the conservative talk station 97.1 FM (home to everyone's favorite local Tea Party babe, Dana Loesch), but a show this week did provide some quality entertainment and follow-up fireworks.

It all began on Wednesday when St. Louis Tea Party founder Bill Hennessy felt compelled to call in to radio host Jamie Allman's morning show on 97.1 complaining that he'd been shot in the back. (Hennessy actually begins his segment saying, "I'm just removing the arrow from my back." Listen to it here.)

Why did Hennessy feel this way? Because Allman and his guests that day (the hosts of an Internet radio show called Hillbilly Logic) were discussing the fact that a PAC called Ensuring Liberty is being formed to pump money into the St. Louis Tea Party.

Allman and his guests fretted that the PAC would detract from the grassroots origin of the Tea Party and make it just another wing of the Republican Party. Hennessy, as it so happens, is one of the founders of Ensuring Liberty.

Here, though, is where it gets really good... 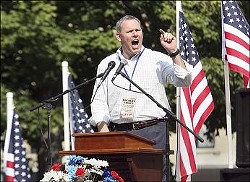 After hanging up with Allman, Hennessy jumped on his blog at the St. Louis Tea Party website and fired off a screed calling Allman "talk radio's stammering, pausing idiot" and comparing him to Fredo -- the character in the Godfather films who is killed for failing to respect the don. (Hennessy's post was later removed but can be found at MOPNS.com.)

That post then prompted Allman to allegedly respond (via Facebook and viewable here) that Hennessy better watch out. As a former investigative journo with KMOV, Allman reportedly writes, "Bottom line: Don't F*** with me. I ate political BSers for breakfast for 14 years and I smell bacon."

Now Hennessy has retracted his original statement and in a post yesterday on the Tea Party blog apologized to Allman.


To Mr. Allman and to you, I am sorry. I look forward to the day when, once again, we can aim our swords AND our shields to the left. The circular firing squad designed to maintain the status quo of Missouri politics is playing right into the left's hands. I am very sorry if my post last night in any [way] re-armed that circular firing squad.

Now, please, everyone.  Repeat after me:  The enemy is on the left.

Many hat tips to Adam Shriver at St. Louis Activist Hub who's been chronicling the Allman/Hennessy brouhaha with all the zeal and alacrity of Bob Woodward covering Watergate. See his site for more detail on the tiff.