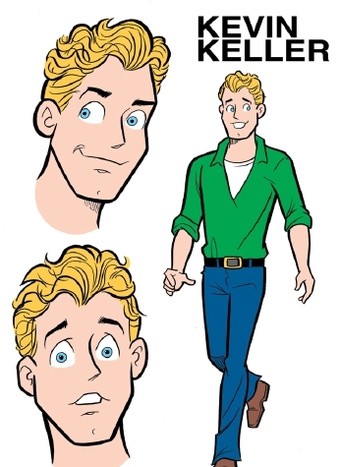 Meet Kevin Keller, the new kid in Riverdale, the "Missouri-area" town where Betty and Veronica have been battling it out for Archie for more than 50 years. He's blond. He's buff. He's super-cute, in a wholesome sort of way. He's also gay.

Kevin will appear in September's VERONICA #202, in a story called "Isn't it Bromantic?" Kevin Keller is the new hunk in town and Veronica just has to have him. After Kevin defeats Jughead in a burger eating contest at Pop's Chocklit Shoppe, she desperately latches onto him. Mayhem and hilarity ensue as Kevin desperately attempts to let Veronica down easy and her flirtations only become increasingly persistent.

So does this mean Jughead will finally find true love?

Alas, no. "Traditional Riverdale characters won't be coming out," artist-writer Dan Parent told the Washington Post. Jughead will bond with Kevin, though, over their shared love of hamburgers. That could be a metaphor, you know?