From the Labs: New Research at Wash. U. 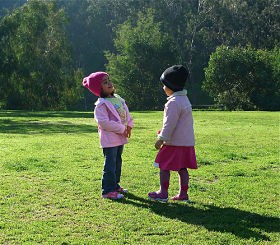 Happy People Have Better Conversations Than You Do: Apparently Jean-Paul Sartre was wrong: Hell is not other people. The happiest people, a new study from Washington University and the University of Arizona shows, are the ones who spend less time alone and more time engaging in meaningful conversation with other people.

The researchers tracked 79 college-aged subjects over the course of 4 days, recording 30-second snippets of sound every 12.5 minutes with a small recording device. The researchers then had the (unenviable task) of listening to each of the 20,000 clips and determining whether the chatter was real conversation or just small talk.

The participants' level of happiness was measured by psychological tests, self-assessments and reports from friends.

In the end, the researchers determined that happy people spend 25 percent less time alone than unhappy people and and 70 percent more time talking to other people. The happy people had twice as many substantive conversations and endured one-third less small talk.

"Overall, these findings suggest that meaningful interactions with others are important for well-being," said Simine Vazire, a Wash. U. assistant professor of psychology who conducted the study. "However, our research cannot determine whether meaningful interactions cause happiness, whether happiness causes people to have more meaningful conversations, or whether there is another explanation.

"We believe it's likely that both are true -- happiness leads to more meaningful connections with others, which then produce more happiness -- but this remains to be tested in future research."

A report on the study appears in Psychological Science.

Intimations of Immortality: A team of nutrition and longevity researchers at Washington University School of Medicine, University College in London and the Andrus Gerontology Center at the University of Southern California have found that cutting calories increases the lifespan of a wide variety of organisms, ranging from yeast to rodents.

Calorie restrictions have had an effect on molecular pathways related to aging on all the animals the team has studied. In the less-complex organisms, restricting calories can double or even triple the lifespan, though so far no one is sure what the effect will be on humans.

Of course, the scientists claim their research is all about health, not the pursuit of immortality.

"The focus of my research is not really to extend lifespan to 120 or 130 years," said Luigi Fontana, research associate professor of medicine at Washington University and an investigator at the Istituto Superiore di Sanità in Rome, Italy. "Right now, the average lifespan in Western countries is about 80, but there are too many people who are only healthy until about age 50. We want to use the discoveries about calorie restriction and other related genetic or pharmacological interventions to close that 30-year gap between lifespan and 'healthspan.'"

Their report appears in the April issue of Science.

Mapping Out Breast Cancer: A team of scientists at Wash. U. Medical School's Genome Center has mapped the entire DNA sequence of a 44-year-old African-American woman who died of "triple-negative" breast cancer, a particularly virulent strain that disproportionately affects younger women and women who are African-American.

The scientists hope that by decoding the gene, they'll be able to target the particular mutation that caused the cancer and devise drugs better-equipped to fight it.

"We are getting an intimate look at the lethal spread of a breast cancer, which is now possible because we can sequence entire genomes quickly at a reasonable cost," said Elaine Mardis, PhD, co-director of Washington University's Genome Center.

The study appears in the April 15 issue of Nature.