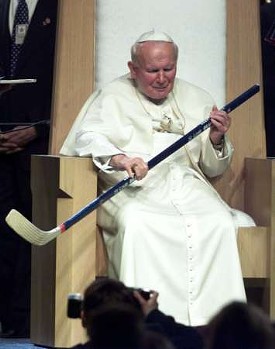 The Catholic Diocese of Springfield, Illinois, will soon welcome a new bishop to their flock. Pope Benedict XVI appointed Thomas J. Paprocki to the position yesterday.

Paprocki is interesting for several reasons. Fist of all, he is an avid hockey fan and sometimes practices with the Chicago Blackhawks, hence his nickname 'Holy Goalie.'

And then, as with most recent news in the Catholic church, there's the child abuse issue.

The Survivors Network of Those Abused  by Priests (SNAP) wasted no time in criticizing the appointment, calling Paprocki an "extremist."

"In 2007, Paprocki, said "none other than the devil" was behind the unending clergy sex abuse litigation," says SNAP executive director David Clohessy.

The criticism didn't stop there.

"Paprocki comes out of an archdiocese with a very troubling track record on clergy sex crimes and cover ups. And he's done nothing to ameliorate, criticize or distance himself from the reckless, callous and deceitful actions of the Chicago archdiocesan hierarchy," says Clohessy.

In a speech yesterday, Paprocki fended off the slap shots from SNAP.

The Belleville News-Democrat quotes him as saying:


"I believe that the scourge of sexual abuse of minors is a terrible sin and a great crime," he said. "I may not have been as clear as I might have been in that homily. I was not singling out the court cases, but the whole scenario, starting from the temptations that priests have succumbed to, this sinful activity, that's where it starts and where it leads to."