Tuesday Tussle: Part 1, Tearing Down I-70 Near the Arch Is Utterly Unnecessary

"Conceivably, you could actually picnic on the Archgrounds and walk back to the stadium. At this point, you have to walk so far out of your way most people won't even try to accomplish that." -- Andrew Faulkner, as quoted earlier this month on KMOX.com

Faulkner is affiliated with City to River, an organization that (obviously) supports putting a lid over I-70 through downtown in order to "reopen the region's front door" and better "connect" the Arch with downtown. Amidst the City + Arch + River design competition, this idea has received vocal support from both business owners on Laclede's Landing and the Post-Dispatch editorial board, which called Memorial Drive "the scar that separates the Arch from the public."

While the existing set-up isn't the most scenic stretch of sidewalk on the planet, it is perfectly functional, making any plan to spend tens of millions of dollars on a slightly more pedestrian-friendly pavilion seem absurd.

To prove this point, I ate lunch under the Arch and then timed the walk to Busch Stadium -- the exact journey that Faulkner and others say is too much of a hassle. I started directly beneath the the Arch, strolled up Market and took a left on Broadway, arriving at the centerfield entrance to the stadium. Stopping twice to snap pictures, the entire trip took eight minutes and 34 seconds, according to the digital timer on my wristwatch.

Short of installing an airport-style conveyor belt, the walk couldn't have been any easier. It took about four minutes to get to the Old Courthouse, five and a half to hit Kiener Plaza and, had I continued up Market, it would've been just another two or three minutes to reach Citygarden. There were even two hot dog/bbq vendors set up early for the Cardinals game along the way in the event that I forgot my brown-bag picnic.

Some St. Louisans are willing to walk. Others would pave over the freeway and build a parking lot. Throwing a heap of taxpayer dollars at the problem (and snarling traffic in the process) won't change that.

Still, improvements could easily be made. One of the most sensible solutions I've read comes from Alex Ihnen UrbanSTL.com. He advocates a few simple aesthetic improvements like wider sidewalks, improved street lights, benches and plantings. "It's not the size of the [I-70] barrier in St. Louis that is ultimately the problem," he writes. "It's the treatment of that barrier."

Why not spruce up the riverfront south of the Arch too? Look how desolate the area along the river is right now: 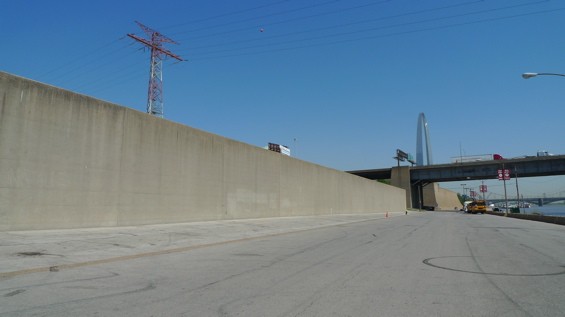 Allowing merchants to operate here and/or creating a public art space similar to the street art and murals on the flood wall further down could steer foot traffic to the river (St. Louis' most under-utilized asset) and make crossing into downtown near Chouteau's Landing the best route. Not only would this stimulate development south of Busch Stadium, there's no I-70 blocking the existing path.

For a counterpoint to this argument, see: Tuesday Tussle: Part 2, Keegan Is Wrong, We Need A New Memorial Drive.