Jarrod "The Deer Commander" Hayn Saved By the Supreme Court? 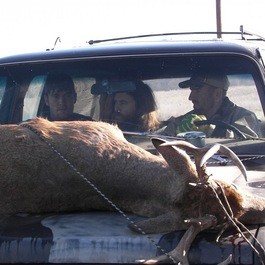 Last week Daily RFT detailed the bizarre case of Jarrod Lee Hayn, a 38-year-old man from Kampsville, Illinois, facing up to three years in federal prison for recording himself running over deer and selling the tapes under the title The Deer Commander -- Sudden Impact.

Today, the U.S. Supreme Court ruled in an unrelated case that the two laws being used to prosecute Hayn are unconstitutional.

Hayn's attorney, Edward Fanning, believes the ruling will spell the end of the government's case against his client. "It should make for an absolute dismissal," he said. "We can hopefully put this to rest. The law really wasn't designed for a situation like what they charged it with my client."

The law, passed by Congress in 1999, makes it illegal to possess or sell depictions of animal cruelty. It was originally intended to outlaw so-called "crush films," which cater to a sexual fetish that involves women stomping animals with high heels.

More recently, including in U.S. v. Stevens, the case argued before the Supreme Court, the statute was used against people who videotaped dogfights.

The court ruled 8-1 that the law violates the first amendment. Writing for the majority decision, Chief Justice John Roberts called the law "a criminal prohibition of alarming breadth," that could be used to prosecute many legal forms of expression. Animal cruelty, he said, did not fall under the same legal umbrella as child pornography.

Via the New York Times:


Chief Justice Roberts said the law applied even more broadly. Since all hunting is illegal in the District of Columbia, for instance, he said, the law makes the sale of magazines or videos showing hunting a crime here.

The law contains an exception for materials with "serious religious, political, scientific, educational, journalistic, historical or artistic value." Those exceptions were insufficient to save the statute, the chief justice wrote.

"Most hunting videos, for example, are not obviously instructional in nature," he said, "except in the sense that all life is a lesson.

Hayn's attorney maintains that his client's video, though strange, is in the vein of such hunting videos.

"We're looking at videotaping deer," Fanning said. "What one person might find acceptable techniques in hunting, another might find those very offensive and cruel."

Fanning also explained how and why his client recorded his deer-smashing exploits.

"There was no intent of my client to hit anything," the attorney said. "He was merely videotaping his trips back to forth to work that involved, at times, striking deer.

This was over a ten-year period of time," Fanning continued. "Living in a rural area, he travels a significant distance back and forth to work on shift work. He drove at peak hours of wildlife movement, in an area known for a significant number of deer. The problem was he was tearing up vehicles. The insurance company was concerned about number of claims so he started to videotape, just to prove these things were actually happening."

Asked how many deer Hayn mowed down in his decade of driving, Fanning replied, "I don't know the exact number that was hit over a ten-year time frame. Even if you look at the video that they're talking about they're mostly misses."

Daily RFT has contacted the U.S. Attorney's Office of Eastern Missouri regarding the impact of the Supreme Court ruling on the case and we are awaiting a reply. Check back for updates.