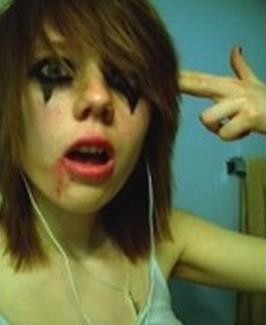 Remember Alyssa Bustamante? She's the fifteen-year-old from outside Jefferson City who is accused of murdering her nine-year-old neighbor Elizabeth Olten last fall because she "wanted to know what it felt like." Her arrest led to an amusing attempt by KSDK-TV (Channel 5) to define the term "emo."

Based on the KSDK report and others, it seems like an emo kid would like nothing better than to spend all her time up in her room listening to "emotional" music and cutting her arms to show the world her pain. Since her arrest, Bustamante has been imprisoned, awaiting trial. What is more emo than that?

But now, reports the Columbia Tribune, Bustamante has apparently had enough. This week her lawyers filed a motion with the court for Bustamante to be allowed to finish high school.

If the judge allows it, Bustamante would enroll in the University of Missouri High School, which specializes in long-distance education. The state would pay for her tuition and books and other materials. Maybe they'll even give her a video camera.