TNA Wrestling brought its pay-per-view "Lockdown" to St. Louis yesterday (well, St. Charles anyway) and like any rasslin' event worth its tights included an impressive array of acrobatics and dirty tricks.

Here, in ascending order, are the Top 5:

#5: AJ Styles' diving splash from the top of the steel cage: TNA champion AJ Styles successfully defended his belt against D'angelo "The Pope" Dinero in the penultimate 'bout of the evening. Styles scored huge, um, style points when he flew off the top of of the cage to smash a hapless Dinero, who (despite his name) just wasn't "money" last night.

#4: Hulk Hogan dropping Ric Flair onto a pile of tacks: The future of TNA Wrestling was secured for the good guys last night when Hulk Hogan's team of four wrestlers bested those backed by foe Ric Flair. The two old dogs were supposed to serve solely as managers of the two teams, but you'll never guess what happened! They got so mad at each other that they jumped into the ring to fight each other. Hogan prevailed when he dropped Flair (perhaps with a pair brass knuckles) into a pile of thumbtacks spread across the mat. Ouch!

#3: Men beating each other with disposable aluminum cookie sheets: Wrestlers in the Team Hogan v. Team Flair match were allowed to use an impressive array of weaponry, including a set of trash cans (with lids!), axe handles, a guitar and what appeared to be disposable aluminum cookie sheets that rang like a gong (and crumpled like a Ford Pinto) on impact. 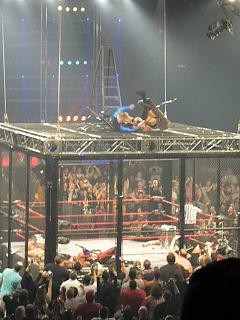 #1: Kurt Angle's fifteen-foot back flip off the cage onto Mr. Anderson: Yes, the No. 1 highlight of Lockdown came halfway through the event when Kurt Angle (an actual wrestler who won gold in the '96 Olympics) climbed to the top of the cage and then flipped backwards through the air and onto his challenger Mr. Anderson. At the highest point of aerial assault, Angle was probably at least 15 feet above the mat. The move prompted one audience member, 38-year-old Dave Geeting (who claimed he is an investment banker) to momentarily set aside his Blackberry to declare: "I've never seen anything like that before. Ever."