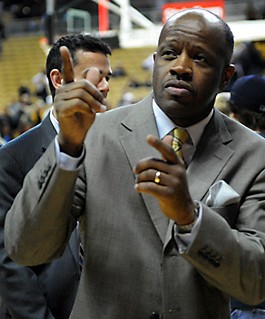 Money isn't everything in college basketball. Well, not quite everything.

Over the weekend Missouri basketball coach Mike Anderson turned down the opportunity to coach the Nike-sponsored Oregon Ducks. The estimated $3 million contract he was offered would have nearly doubled his current salary. The Tigers coach told the Post-Dispatch that the decision was "pretty easy."

It should have been a no-brainier. After two Elite 8 appearances in ten years, Oregon has struggled mightily lately, finishing in ninth place in the Pac-10 this past season.

Anderson, meanwhile, just signed a seven-year contract extension and brought in a stellar recruiting class that includes two son of his close friends and former roommate at Tulsa, Paul Pressey.
The snub is the latest in a long-line of disappointments for Oregon. They have now failed to land the top six coaches on their wish list. The struggle to find a coach is doubly perplexing considering the clout (and cash) they have to offer. Nike founder Phil Knight, an alum of the University, just bankrolled a new campus arena.


But Kilkenny appears to be working his way down a wish list provided him by the Spencer Stuart search firm.

With Nike helping with the search, that list probably does not include coaches from Adidas schools such as St. Mary's (Randy Bennett) or Baylor (Scott Drew).

Losing out on Anderson, 50, is a blow for a number of reasons. He has led the Tigers to an 88-46 record in his four seasons in Columbia. He would have brought the playing style the Ducks covet. And he was believed to be favored by Portland prep star Terrence Jones, who has Oregon in his final three college choices.

The exact details of Oregon's offer to Anderson are unknown, but the deal surely would have given Anderson a sizable raise from his current salary of $1.55 million.

And, unlike many of the coaches the Ducks have pursued in the past month, Anderson is not getting a raise or a contract extension as a result of Oregon's interest.