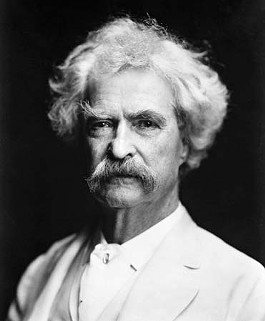 Even if you slept through every single high school English class you already know that Mark Twain is a great American novelist. What you probably don't know -- unless you read this morning's New York Times-- is that the Missouri native was also a literary critic and sought-after editor, despite his tendency to tear his peers apart while critiquing their work.

With the 100th anniversary of Twain's death approaching on April 21, the NYT's Allison Leigh Cowan was allowed access to a collection of books that came from the author's personal library in Redding, Connecticut. The notes she found scribbled in the margins reveal that Twain had a keen eye for grammar, style and substance and favored commentary that Cowan aptly describes as "savage."


"The English of this book is incorrect & slovenly & its diction, as a rule, barren of distinction," Twain scribbled in his copy of a 1906 autobiography of Lew Wallace, the Civil War general who wrote "Ben-Hur.

Twain is notoriously ornery in his own prose (particularly in his first-person travelogues Roughing It and Innocents Abroad) but the discoveries reveal another, even more prickly side.

Another highlight from the piece:


Not even friends like Rudyard Kipling escaped the thwack of Twain's lash. Kipling received an honorary degree from Oxford along with Twain in 1907, and Twain considered Kipling a friend whose poems he often read aloud. Yet, there on Page 249 of Twain's copy of Kipling's "Departmental Ditties, Barrack-Room Ballads and Other Verses," Twain could not resist changing "heaved" to "hove."

Two pages later, he turned a comma into a semicolon.

"Twain could just lacerate a book," said Kevin Mac Donnell, a collector of rare books in Austin, Tex. who owns more than 150 books once owned by Twain. Badly written books bore the brunt of his annotations, Mr. Mac Donnell said, but the author "would also correct a book if he thought it was a gem."

"I wouldn't be surprised if he corrected the Bible and Shakespeare," he added.

Click here to read the whole thing. Then go pick up a copy of A Connecticut Yankee in King Arthur's Court and re-read one of the most underrated book in American literature.