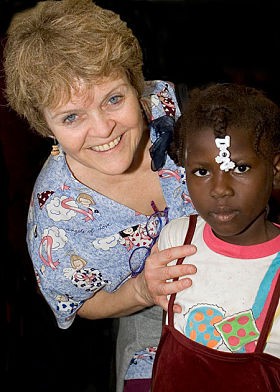 Even before last January's earthquake, Haiti was the poorest country in the Western hemisphere. Thirty percent of its budget came from foreign aid. Infant mortality was high. So was the rate of childhood malnutrition; according to the United Nations, one child died every five seconds.

St. Louis pediatrician Dr. Patricia Wolff and her staff from Meds & Foods for Kids traveled to Haiti to investigate why Haiti's children were starving. She discovered that most Haitians lack stoves and running water, which makes cooking a complicated chore.

So Wolff developed the idea of helping Haitians produce an enriched peanut butter called medika mamba, made with locally-raised peanuts, to feed to malnourished children. Medika mamba is a surprisingly good source of nutrition, doesn't require any cooking, has a long shelf life and by making production local, it would create a modicum of financial independence.

Of course, not all went as planned, even before the earthquake hit.

Now two local filmmakers have started work on a documentary about medika mamba.

Frank Popper and Lori Dowd of Avatar Studios traveled to Haiti to follow the progress of Wolff's project. The League of Women Voters will show some of the footage from Mamba Mirak, their documentary-in-progress, on May 8 at the Center of Clayton (50 Gay Avenue). Tickets are $10 each. Call 314-961-6869 for reservations.

Click here to see a preview of the film.