Want to See Sarah Palin in St. Louis? Here's Her Contract, Found in a Dumpster

Interested in booking Sarah Palin at your birthday party, graduation or revolution-inciting tea party? Her contract found in a Dumpster can now give you a head-start on what you're in for. 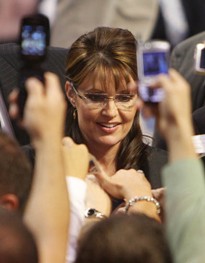 Two California State University students found in a Dumpster what's thought to be the last six pages of a nine-page contract for Sarah Palin's planned speaking engagement at the university this June. The students presented the contract -- along with two garbage bags full of shredded paper -- at a news conference on Tuesday at the California State Capitol.

What's not answered in the found contract is how much Palin is to be paid for the speaking engagement -- thought to be $100,000 per appearance, according to some sources. There is some controversy over the her appearance at CSU, and critics of Palin filed a public records request to see the contract. They had not received it until the two students found it in the trash.

"It is truly shocking and a gross violation of the public trust that such documents would be thrown away and destroyed during a pending investigation," said California state Sen. Leland Yee Tuesday in a statement.

Finding hot docs in Dumpsters isn't a new trend by any stretch: the most recent find here in St. Louis occurred when a hair stylist found the script for Twilight: New Moon in a Dumpster near the Chase Park Plaza.

After the jump is the Palin contract, which, among other demands, calls that she fly on a "Lear 60 or larger" private plane, if the customer chooses to provide her with one. She'd also like bendable straws with her water bottles (2.) A Rolling Stones concert rider it ain't, but it will give you a glimpse into the demands of America's most popular female politician & pundit.