Construction to Resume on Shriners Children's Hospital in CWE

Construction will finally resume later this year for the new Shriners Hospital for Children in the Central West End a year after the recession put the project on hold, the hospital's board announced on Tuesday. 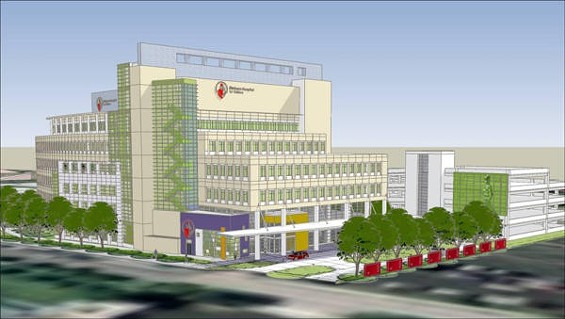 Workers were set to begin construction on the 247,000 square foot, $170 million facility in April of 2009 when the Shriners Hospital board, located in Tampa, announced that the recession had seriously cut into its finances, whittling the endowment from $8 billion to $5 billion, rendering the new structure unfeasible.

The proposed hospital site, at 4400 Clayton Avenue, is currently a parking lot in the middle of the Washington University Medical Center complex. The hospital's current location is in west county, at 2001 S. Lindbergh Blvd in Frontenac.

The new building will have 30 inpatient beds, four surgical suites and 30 clinic examination rooms. It's unclear how the construction delay will affect the final cost of the project.

"We are very excited that we can finally move forward with the construction of our new hospital," said Ray Rohr, chairman of the board of governors for the hospital, in a statement to the St. Louis Business Journal. "While our current facility has served us well, and will continue to do so for the immediate future, our patients and their families deserve a facility that better reflects the state-of-the-art care we provide."