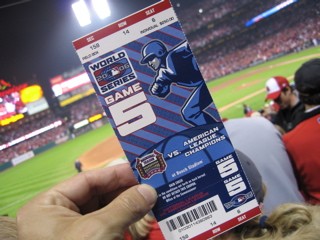 The Cards-Astros home-opener wasn't the only shutout in town yesterday.
Three years after improprieties involving city cops and 2006 World Series tickets confiscated from scalpers came to light, a St. Louis judge last night issued a final ruling in the related Sunshine Law case against the police department: The judge denied the department's last-ditch attempt to keep sealed key Internal Affairs Division documents.
"The Board's and the [St. Louis] Metropolitan Police Department's ability to maintain the trust of the people they serve depends substantially on conducting their operations openly - in the clear view of the public - rather than privately and behind closed doors or behind closed files," wrote St. Louis Circuit Court Judge Philip Heagney.
"Missouri's Sunshine Law is based upon and promotes this fundamental principle of democratic government. The Sunshine Law reminds the Board of Police Commissioners and the Metropolitan Police Department of the importance of operating in plain view of the public they serve.
"In accordance with Missouri's Sunshine Law, public business should be carried out in public.
"The Sunshine Law requires the Board of Police Commissioners and the Metropolitan Police Department to operate in the open," concluded Heagney. "It is time for the Board to obey the law."
Local gadfly John Chasnoff sued the department in 2007 after its attorneys refused to comply with his sunshine request for the internal affairs documents. Media outlets including RFT were also denied access to the IA investigation files.
Earlier this year, the department at the court's order turned over one portion of the documents but fought to keep the most substantive files sealed.
The latter files contain interviews with the officers and supervisors involved in the scandal. Those files were never reviewed by Circuit Attorney Jennifer Joyce; she never prosecuted anyone in the case.