Mustache War! Stan Kroenke vs. Shahid Khan. Whose is Better? 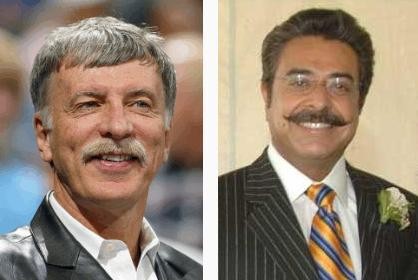 If you haven't heard already, Rams minority owner Stan Kroenke is challenging NFL rules to gain full ownership of the St. Louis football team. His move leaves in the lurch Illinois businessman Shahid Khan who emerged two months ago as the man most likely to purchase the club.

Kroenke must now convince NFL owners to change the league rule that prohibits someone like him (who owns the Colorado Avalanche and Denver Nuggets that compete in a city with an NFL franchise) from owning a football team.

Here at Daily RFT we think these men should let their mustaches do the talking with the man with the best 'stache earning the rights to the team.

What do you think readers? Which man -- based on his mustache alone -- should be the rightful owner of the Rams? Cast your vote vote after the jump!