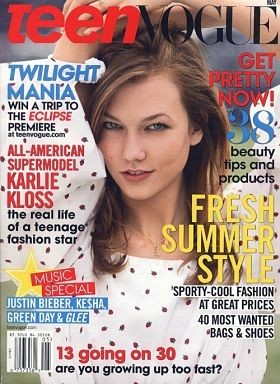 Karlie Kloss, the international supermodel/Webster High School junior is on the cover of the May issue of Teen Vogue.

Inside, Kloss talks about being an ordinary all-American girl who, backstage at shows, catches up on her reading of The Great Gatsby for English class. She bakes peanut-butter cookies for designers (and also the editor of Teen Vogue, though not the staff of Riverfront Times when she appeared in a 2008 feature story) and, on her last day off before New York Fashion Week, heads to Central Park to make snow angels with her best friend from home.

But! She also has an apartment in Manhattan, appeared in grown-up Vogue in 2009 more than any other model and is beloved by designers like Marc Jacobs, Alexander Wang and Jason Wu and photographers like Steven Meisel.

"It's ridiculously corny," she says, "but I feel like I have the best of both worlds. I'm able to travel and work with these iconic people in the industry, and then come home to St. Louis, go to school, and see Brittney and my friends in class. I just keep thinking how lucky I am that I haven't had to sacrifice anything." (She's worked out a special arrangement with her school whereby she takes courses online when she's traveling.) When I mention seeing a photo of her reading a book backstage at one of the shows, she laughs and admits that she was doing homework. "I have to show that to my teacher Ms. Brewster!" The hometown response to Karlie's success has been "incredibly supportive," she reports. "Everyone just kind of accepts it," says Brittney. "They've gotten over the shock of 'Oh my God, she's a supermodel!' It's just Karlie."

Jezebel is concerned that the Teen Vogue article glosses over the darker aspects of teen modeling. For contrast, the editors recommend you check out the documentary America the Beautiful, which, in part, follows the career of another teen model, Gerren Taylor, who walked the runways at 13 and was all washed up by 15 because casting directors in Paris told her she was too fat.

Of course, we really can't expect Teen Vogue to delve into the negative aspects of being a teen model, and maybe Gerren's experience is not the norm. But the profile of Karlie makes it seem like being a teenage model is a dream job with zero drawbacks. (Interesting that there's an unrelated coverline: "13 Going On 30: Are You Growing Up Too Fast?") 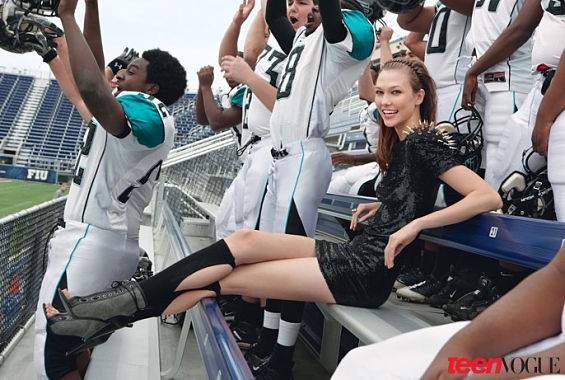