Cardinals Ranked as No. 8 Most-Valuable Franchise Worth $488 Million 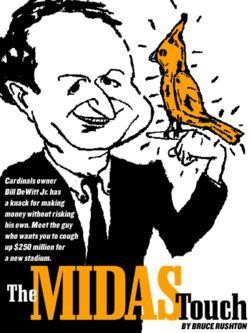 It's the Cardinals home opener this afternoon, and if the team's owner Bill DeWitt Jr. were to give a speech today, one suspects it would begin: "The state of Redbird Nation is strong."

The Cardinals have won their first two series on the road and are predicted to once again win the the Central Division. Moreover, the team is on firm financial footing, according to the latest issue of Forbes.

The magazine ranks the Cardinals as the eighth most valuable baseball franchise among the 30 teams with an estimated worth of $488 million. That ranks just below the Los Angeles Dodgers and above the San Francisco Giants.

According to Forbes, the Cardinals took in $195 million in revenues last season and reported an operating income of more than $12 million.

The most valuable team, per Forbes, is the New York Yankees with an estimated worth of $1.6 billion -- nearly double the value of the next highest team, Boston Red Sox, at $870 million.

The Kansas City Royals ranked as No. 24 with a value of $341 million. Dead last was the Pittsburgh Pirates with an estimate franchise value of $289 million.

While the overall economy continues to lag, Forbes reports that Major League Baseball enjoyed its best season ever, raking in a record $522 million in operating income.