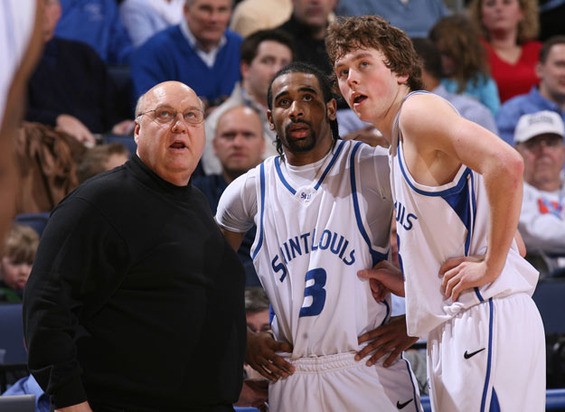 With all the faux-controversies that dogged Billiken basketball this year -- television snafu's, Rick Majerus' canceled radio show, the coach's views on stem-cell research and a dubious Internet rumor about pooping in towels -- that headline could easily be taken figuratively.

SLU lost 71-65 Wednesday night to Virginia Commonwealth in the championship series of the CBI postseason tournament. That's a far cry from the Final Four but it's still nothing to sneeze at. SLU exceeded all expectations this season and grew substantially as both a team and a program.

Who cares if they ended up in an off-brand tournament? As the Post-Dispatch's Tom Timmerman pointed out: SLU was one of the last eight teams in the nation still playing basketball. That's valuable experience and practice time heading into next season.

Kudos to Rick Majerus for assembling this year's squad and molding them into a team that was on the cusp of competing for a spot in the NCAA tournament.

Kwamain Mitchell and Willie Reed are an exciting tandem that will anchor the Bills for the next two seasons. Kyle Cassity and Brian Conklin are solid role players in a conference like the A-10. Cody Ellis could develop into a star if he hones his outside shot and gets stronger inside.

And they already have a commitment from a highly-touted seven-foot center from New Zealand for reinforcements in the coming years.

I said it last year, I'll say it again now: it's nice to finally have a real Division I basketball team in St. Louis. Now if only they could get their games on TV...