Secretary of Energy Steven Chu to Speak at Wash. U. Commencement 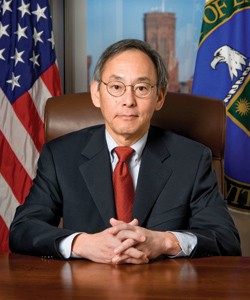 Remember when Washington University gave Phyllis Schlafly an honorary degree? Remember those heady days of anger and protest? College commencements are, by their nature, dull, but this one was way more exciting than usual.

Continue to dream on past glories, people. Wash. U. Chancellor Mark Wrighton announced this week that this year's commencement speaker will be U.S. Secretary of Energy Steven Chu.

Chu, a St. Louis native, was appointed Secretary of Energy by President Obama in part because he has long been a champion of finding alternative energy sources. He won the 1997 Nobel Prize in physics for his work with atoms. Even the most die-hard of Wash. U.'s environmentalists are pleased with Wrighton's choice.

However, the Wash. U. students have one teensy request of the secretary. Reports the school paper, Student Life:

This year in particular was filled with environmental student activism. Student Union passed a resolution condemning the term "clean coal" and urging the administration to look into alternative energy sources. In light of the resolution, students are writing Chu a letter requesting that he not use the term "clean coal" in his speech.

So there might be some Commencement excitement after all! And Wrighton has yet to announce the honorary degree recipients. Anyone want to offer a suggestion? Remember: It has to offend as many people as possible.