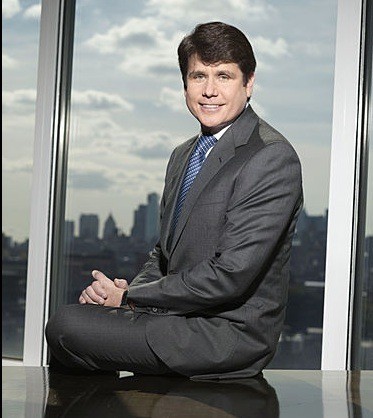 It's an incredible responsibility being governor of a major state. There's so much work to be done, so many photo ops to smile for, so many profane phone calls to be made, so many favors to be sold that it's a wonder the governor has time to sleep, let alone keep up with modern technology!

And so it was that on Celebrity Apprentice last night, Rod Blagojevich, faced with an ordinary MacBook, was rendered absolutely helpless in the face of such complex technology. "How do I turn this thing on?" he inquired of his project manager, former Olympian Michael Johnson. Somewhere, Steve Jobs is weeping. (Well, if Steve Jobs bothered to watch crap like this. One would sincerely hope he has better things to do.)

"There's a lot of technology that's passed me by," the former governor explained. "When you're governor, you've got 60,000 people working for you, they pretty much research for you. And before that I was a congressman, so I never had to learn it. So..."

Johnson quickly decided that doing an Internet search was beyond Blago's capabilities and assigned him some sort of task that involved typing on Microsoft Word. Blago typed as if he had never seen a QWERTY keyboard before. How the hell did the man get through law school?

Amazingly, this was not Blago's first great moment of the night. That came about fifteen minutes in when the men's team was squabbling over who should be the official spokesman in their advertorial to promote Norton and LifeLock, two computer programs that prevent identity threat. Blago was gunning for Johnson, but the project manager chose Curtis Stone instead.

"We're making the same mistakes we made in the other tasks," Blago told Johnson and Stone earnestly. "We're prematurely ejaculating. We need more foreplay."

Blago did not improve during the task. His incompetent typing yielded one paragraph after half an hour of labor (though, to his credit, he did seem to be working hard), so Johnson sent him out on the street with Darryl Strawberry. Once again, Blago could not stop himself from chatting with every passer-by and proclaiming his innocence. (The editors obligingly played "Hail to the Chief" in the background.)

Finally Strawberry decided to take the former governor in hand. "In New York," he explained, "you just say 'Hi' and keep moving."

"Gotcha," Blago said. And then immediately turned to say "Hi" to someone passing by. But he kept moving. Baby steps.

In the end, the men lost. Their advertorial, the judges decided, was too verbose. Johnson deemed Blago the most useless player on the team. But, he was quick to add, not the reason they lost this particular task. "Now you can go do your political...thing," he told the former governor.

Unexpectedly, Trump leaped to Blagojevich's defense. "Rod is in a difficult position because he has to be nice to everyone," The Donald proclaimed. "One of you might have a relative that's going to show up on his jury. If I were him, I think I would be kissing ass, also."

It was unclear if this was sincere or if Trump just likes having Blago around because the other contestants so obviously hate his guts.

But Blago was spared elimination this week by Darryl Strawberry practically begging Trump to fire him. Strawberry didn't want Johnson to get fired and also, he was really, really tired and wanted to go home. (It's tough being a celebrity, Strawberry explained in a confessional. When you're used to sleeping till noon, the nine-to-five grind can really wear on you.)

"The governor wants to go," Trump taunted Strawberry. "He's got a lot of stuff to take care of."

"No!" Blago cried. "I want to stay and support my charity!" (His charity, by the way, is pediatric cancer.) Doing stupid fake business tasks is probably a lot more pleasant than working on legal defense strategy anyway.

And so Strawberry got his wish and got to go home.

In other news, Strawberry is still a member of Church on the Rock in St. Peters. Or at least he was shilling for it during commercials.