Lessons From a Busted Bracket

Well, at least I had Duke. I suppose one could put that squarely in the Good News column. Kind of sparse column, but not entirely empty.
The Bad News column, on the other hand, that bitch is full. Overflowing, even.
Going into the NCAA Tournament this year, I felt really, really good about my bracket. I felt like there was a clear group of elite teams and then everyone else. All I had to do was pick those elite teams and my pool at work wouldn't know what hit them. I was going to own this year. No clever upset picks, no sleepers, no small schools primed to make a run. Nope, just sheer Darwinian dominance.

Unfortunately, I may be smart enough not to think I'm smart, but I'm not smart enough to know I'm not smart.
The Final Four is now set, and I've been out of both pools I participate in for two rounds. I suck. However, the fact I suck is good news for your Good News column, because I'm going to educate you on just what I did wrong, and see if we can't all figure out how not to fail so miserably again.
I'm not ashamed to admit it: I had all four number one seeds in the Final Four. I did. Like I said, I thought there was a clear group of teams who were soooo much better than everyone else that this was going to be the boringest, most profitable tourney of my life.
In fact, the only slight surprise I had was I didn't have either of the accepted super powerhouses, Kansas or Kentucky, winning the national championship. I thought this was the year Jim Boeheim got another title. Yep, that's right, boys and girls. I had Syracuse winning it all. Do you begin to see now just how badly this thing has gone for me?
I failed in three key areas, I think, and I'll tell you what they are. 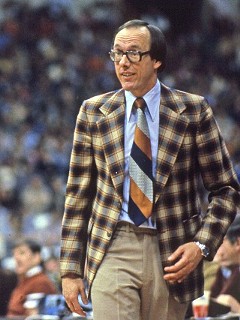 ​Why did I pick Syracuse to win? Because I love Jim Boeheim. I think he's an outstanding coach. I love the zone scheme Syracuse runs, and I thought it would carry them a long, long way. I was banking on the coach to win the title with a group of players who are very good, but probably not quite championship good. And that's fine. A good coach is a huge factor in college basketball.
The problem is I then turned around and bet against Tom Izzo, who -- let's face it -- is the best coach in the game right now. Every year Izzo takes good-but-not-great collections of players and somehow guides them into the Final Four. But I didn't see that. I saw Michigan State didn't have the horses and ignored the coach. I saw Georgetown's performance in the Big East Tournament, and thought they were peaking at the right time. I looked at Butler, though, and ignored the fact they had won 20 in a row coming in to the tourney. For some teams, I emphasized the importance of guard play; for others, I rationalized their guards weren't what made the offense go anyway, so it didn't matter.
The point is this: if you're going to look at a certain facet of a team's performance and assign it value, you need to do it across the board. You can't just pick a team then fit whatever is going on with them into the story that works best. That's not to advocate rigid rules, of course, but if you believe in your criteria, you have to be consistent with them.
Mistake #3: The Single Bracket
I've saved the best for last, boys and girls, and here it is: I participated in two tournament pools, and I submitted the exact same bracket for both. Do you understand the arrogance, the hubris, implied by doing something so foolish? I was so convinced I was right that I failed to even bother mapping out an alternate scenario.
Arrogance is very rarely a useful trait, and it's especially damning when it comes to trying to take your friends' money. And let me tell you, filling out the same bracket twice for two separate pools qualifies as hubris of the very highest caliber.
When you're that sure you've got the right answer, there's literally zero chance you're actually right. It's the exact same thing as the 2005 NLCS, when I told everyone I knew there was absolutely no way the Astros had a shot against the Cardinals. No shot. At all. After all, the Cards had beaten the 'Stros the year before in the NLCS. The Astros lost Carlos Beltran and Jeff Kent, and the Cards actually upgraded their rotation with the addition of Mark Mulder. Houston didn't have a chance. I was totally, completely sure. Then, of course, we saw what actually happened. Oy.
Filling out one bracket and entering it into both pools I took part in is, quite possibly, even more arrogant. And I have been roundly beaten down by the gods of Sport in retaliation. Sort of a Greek tragedy situation, only with betting and basketball.
So what have we learned from the tournament itself this year? Honestly, I'm not all that sure. The last few years have seen very few huge surprises, and then we get this bizarre thing. So maybe this is just one of those years, and there isn't all that much to be gleaned from the games. On the other hand, I think there's plenty we can learn from just how I went about failing to win anything at all this year.