March 29, 2010 at 9:55 AM
comment
The owners of Club Casino are offering a $5,000 reward for information that leads to the capture of the person who shot Brandon Jenkins.

A 22-year-old from Shiloh, Illinois, Jenkins was killed around 3 a.m. Saturday morning inside the popular East St. Louis nightspot on State Street.

View Larger Map
Another unrelated shooting also occurred at 3:30 a.m. on Saturday at Riff's, a bar on the 500 block of North 27th Street. A 41-year-old man was hospitalized after taking a bullet and he is reportedly in stable condition.

The bloodshed is the latest in what has been a long and controversial stretch for the East Boogie nightlife. Last year several metro east law enforcement agencies lobbied for the city to close the clubs, which often remain open until 6 a.m., at the same time as bars on the St. Louis-side of the Mississippi. 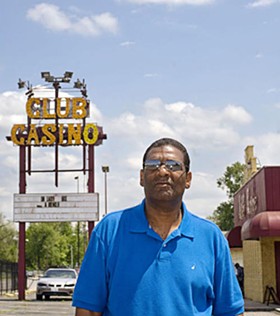 The conflict was the subject of an RFT feature story. Our reporting centered on Club Casino, which owner Cedric Taylor billed as a safe alternative to East St. Louis' smaller hole-in-the-walls. Casino has been in business 22 years, making it the oldest nightclub in the city and Taylor is known for his philanthropy in the community.

The Club also had extremely tight security. Here's how it was portrayed in the story:


All patrons are frisked and swiped with a metal detector. Sixteen video cameras record areas both inside and out. A uniformed East St. Louis police officer often sits in the entrance. Golf carts shuttle customers to and from their cars.

And then there's the crew of nine bouncers who call themselves the Goon Squad. Four men are stationed in the parking lot, five inside the club. All look like they could play left tackle for the Rams.

The squad members claim their reputation alone deters most would-be troublemakers, but if a scrap does break out, they trigger "fight lights," strobes placed throughout the club, to alert fellow team members. The guards generally issue two warnings before giving anyone the boot. One of the combatants is kept behind for a few minutes to prevent the clash from continuing outside.

"I would throw my own brother out if I had to," says Chico, a Goon Squad member with light skin, sleepy eyes and arms the size of anacondas. "But honestly, we get more women fights than anything else. That's almost worse, because when women locked up, they locked up."

And here is how the events that unfolded on Saturday night were described in the Belleville News-Democrat:


Jenkins' cousin, Montez Jackson, described the chaos before Jenkins was shot during a fight on the dance floor:

"The club was real, real packed. I tried to get to him on the dance floor Two bouncers rushed to the dance floor and couldn't control the fight. Once they got there, a gunshot went off. Everybody ducked down, but the two bouncers. My cousin fell back. I grabbed my cousin. He fell into my other friend's arms. His eyes were open, but he wasn't there for real. He made a cough and fell back," Jackson said.

Jackson and his brother, Lorenzo Leonard, said bouncers told them Jenkins might've been hit with a bottle.

"I told them no, you just heard that gunfire," Jackson said. "They told us to get him outside. We took him outside to the front entrance of the club. They told us to move him again. We moved him further down. My cousin lay there for about 20 minutes. The security kept telling us they had called an ambulance. Then, the guy at the front door told us the ambulance wasn't coming, that we'd better take him to the hospital."

East St. Louis Mayor Alvin Parks suspended the liquor licenses of Casino and Riff's immediately following the shootings. The city is holding an emergency liquor board meeting today at 1 p.m. to discuss the clubs' fates.