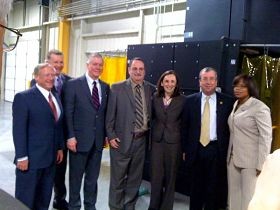 Last year Riverfront Times profiled several schools and organizations around St. Louis that were trying to deal with the dropout crisis, which has reached a critical point: For the 2008-09 school year, the St. Louis Public Schools reported a graduation rate of only 45 percent.

One of the proposed solutions was Shearwater High School, the brainchild of Stephanie Krauss, a 24-year-old social worker who was herself a high-school dropout. Shearwater would allow dropouts to return to school and get their high-school diplomas -- as opposed to a GED certificate -- while receiving practical job training.

When Riverfront Times last checked in with Krauss, she was still scouting locations and planning her curriculum. This morning, more than a year later, Shearwater had its ribbon-cutting ceremony in the welding lab of Ranken Technical College, its new home.

Shearwater will open with 75 students and expand to 150 its second year before capping enrollment at 180. All classes will be taught on Ranken's campus at the corner of Page and Newstead avenues in the Fountain Park neighborhood.

"The students need a more adult environment than high school," Krauss explains. "'We want to expose them to the college environment."

Upon enrollment at Shearwater, students will take Ranken's assessment test. "Once they reach expertise at the K-12 level, they can integrate into Ranken classes," says Ranken's president Stan Shoun.

Most of Shearwater's classes will be geared toward preparing students to work in industries that Krauss has identified as the fastest-growing in the region, including financial services and biotechnology. That means an emphasis on math and science, though there will be some communication classes as well.

Shearwater will operate from 9 a.m. till 5 p.m. year-round to simulate the work environment. Students will spend part of every day working at paid internships; Krauss promises their salaries will increase as they take more classes and gain more experience. "It's a three-year commitment," she says.

Krauss has arranged partnerships with the United Way, Covenant House, the Urban League and Youth in Need, which will provide support services such as counseling, childcare and housing for students who are homeless. Saint Louis University has agreed to serve as Shearwater's educational sponsor, and Emerson Electric has provided more than $200,000 in funding.

Churches and neighborhood associations around the city have hosted recruiting events for potential students and Krauss says she's also received phone calls from young people who have heard about the school on their own.

"We're looking at the next workforce," says Shoun. "When the Boomers leave the workforce, who will replace us? Unless we embrace the disenfranchised, the future workforce isn't there."

He adds: "A lot of things that ail this city can be improved by education."