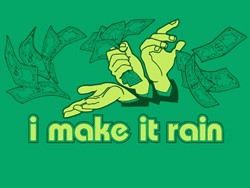 St. Louis is abuzz with March Madness as the NCAA Tournament's Midwest Regional gets underway tonight at the Edward Jones Dome.

First up, the sixth-seeded Tennessee Volunteers take on second-seeded Ohio State at 6:07 p.m. The second game, between the ninth-seeded Northern Iowa Panthers and fifth-seeded Michigan State Spartans, starts at 8:37 p.m.

The St. Louis Regional Chamber and Growth Association (RCGA) expects fans of the teams to drop more than $16 million at hotels, restaurants and other establishments this weekend. And across the river in Illinois, nudie bars are also bracing for brisk sales.

"We usually have a large crowd that comes in on the weekends, but this weekend it should be even larger," Jerry Wilson of the Penthouse Club informs Daily RFT.

"I'm sure we will see increased traffic," says an employee of Hollywood Show Club.

Ed Thomas, of IEC Management (the parent company of five east side strip clubs, including PT's and Roxy's), says his company is doing a lot of promotion tonight around the Edward Jones Dome and expects big crowds all weekend.