St. Louis Men Have No Reason to Be Ashamed of Their Penis Size 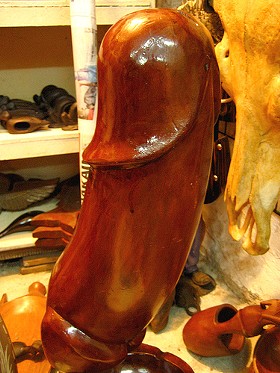 Condomania, the venerable online condom store, has done our nation a great public service. After an exhaustive survey of 27,000 of its male customers, the largest such survey since the heady days of the Kinsey Report, Condomania's tireless statisticians have ranked the cities of America by penis size. It's probably no surprise that Washington, DC, has the second-largest dicks. (Ba dum bum bum.)

For once, the men of St. Louis have no reason to be ashamed. True, in surveys such as these our city only does well in things like number of sexually-transmitted diseases. But this may represent a turnaround.

The men of St. Louis collectively have the tenth-largest penes (that's the correct plural of penis, by the way) in the country! Dudes, be proud. But please don't whip 'em out. If Condomania says it, we believe it.

The rest of the press release after the jump.

LOS ANGELES, March 3rd, 2010 - New Orleans now has another reason to call itself "The Big Easy." The home of this year's Super Bowl champs has taken the top spot in Condomania's ranking of U.S. cities by penis size! 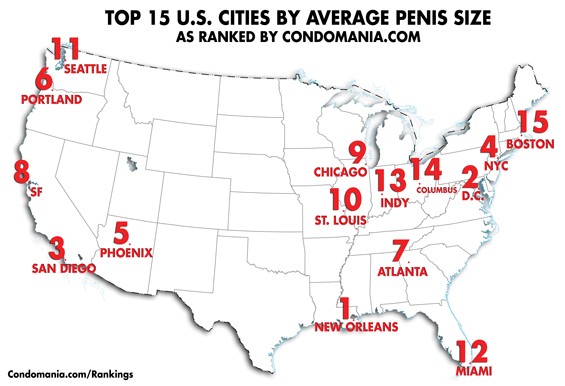 And the men of Washington D.C. apparently are more than just big talk, big egos, and big promises. The Beltway boys claimed a close second place for the biggest average penis size in the nation.

As for the "biggest" state in the Union? While New Hampshire may be one of the smallest states, it's not so small when it comes to penis size, topping Condomania's state by state comparison.

America's first condom store, Condomania (Condomania.com), has just unlocked its huge database of penis sizes and released these unique rankings of the 50 states and the 20 most populated U.S. cities by average penis size. After 20 years in business, Condomania knows perhaps more than anyone else about the nation's penises.

So just how does Condomania know these intimate details? In 2004, the company launched TheyFit Condoms, the world's first line of tailored-fit prophylactics, in 76 sizes. Since then they have sold custom-fit condoms to over 27,000 men in 70 countries, and now have just begun to analyze this incredible cache of data.

"These fitted condoms range in length from 3 to 10 inches and from super slim to extra roomy." says Chris Filkins, Condomania's Directory of Technology. "After gathering detailed information on over 27,000 penises, we now have the most comprehensive database of penis sizes on the planet! Needless to say, these men's privacy is our utmost concern, and we're interested only in the statistics, and not who's who! But the data itself is pretty interesting."

Previously, the largest formal survey of penis sizes was conducted in 1948 by the famous Kinsey researchers, when 2,500 men recorded their erect penis sizes on pre-stamped cards.

Condomania's ten-times larger database is compiled from the unique "FitKit" measuring system for TheyFit condoms, where the user measures the length and girth of his erect penis to the millimeter and then matches those results to one of 76 possible sizes that comprise different length and girth combinations. In this system, the 76 sizes are comprised of non-sequential letters and numbers, so that the smallest is no more obvious than the largest.

"Unlike other studies in which participants were measuring their penis size solely for the sake of recording a measurement, and were perhaps more likely to exaggerate," says Filkins, "our database is comprised of men looking for the best fit condom for safety and comfort, and thus, we believe, apt to be more accurate." Filkins continues, "The customer satisfaction surveys we received overwhelmingly indicated that men of all sizes, but particularly those on either end of the size spectrum, benefited immensely from a properly fitting condom."

Here are some highlights from Condomania's penis database: