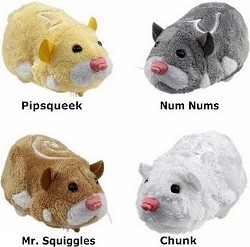 Evidently there's another rodent at play at St. Louis-based Cepia LLC, and it ain't a motorized hamster.

No, according to the U.S. Attorney's Office, a rat has been embezzling money from the maker of the incredibly popular Zhu Zhu Pets for years. And today a grand jury handed down an indictment accusing Cepia's comptroller, Joseph B. Van Gronigen, of embezzling in excess of $400,000 from the company from between September 2007 and January 2010.

Cepia brought the matter to the FBI for investigation. Van Gronigen, 41, of Hillsboro is charged with two felony counts of mail fraud and is expected to appear in federal court later this week.

If convicted, each count of mail fraud carries a maximum penalty of 20 years in prison and/or fines up to $250,000.