Get Your Bracket Ready: Alternatives to NCAA March Madness

Fortunately, all across the wondrous world of the Interwebz, there's a plethora of tournament brackets to rank things other than college basketball. Sure, none of the "winners" are determined by anything so straightforward as a ball game -- mostly they're based on public opinion -- but who cares? Everybody deserves something to root for. 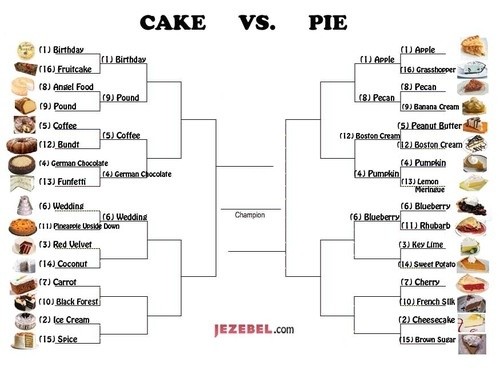 Over at Jezebel, cake versus pie has been a debate of long standing. This month, the editors have finally decided to take action. Thirty-two cakes and thirty-two pies will battle for supremacy, and then the two finalists will, presumably, settle the cake/pie question once and for all. Winners are determined by daily polls.

It's still early days, and some of the competitors have been controversial. (Can Boston cream pie be fairly classified as a pie when it's actually more of a cake? How can one fairly judge "Birthday cake" when, as a concept, it has no single, Platonic ideal?) There haven't been many surprises, either, aside from number 12 seed Boston cream pie's rout of number 5 peanut butter. Still, we're excited to see how this one turns out.

Along similar lines, Tomato Nation this year has set up the N Candy AA tournament. Previously, they have tackled ice cream and breakfast cereal. The N Candy AA is two-fold: First, chocolate-based candy, followed by non-chocolate.

The science fiction site BSCReview is running a tournament for best new sf/fantasy novel (they'll have another for classics later in the year). The readers of Jen's Book Thoughts will determine the best fictional detective.

And for serious literary types, The Morning News has set up its sixth annual Tournament of Books. This one, sadly, is entirely a spectator sport: Special guest panelists determine the winners of each match and there is no prize for the reader who submits the most accurate bracket (though the two moderators have set up their own private rankings have have wagered gifts from their home states). But they do have a statistician on board!

Sadly, Geek Force Five declined to repeat last year's tournament of geek obsessions. And unfortunately Buffyfest has already picked its favorite favorite character (Buffy, duh!), but there's still time to vote for your least favorite. If DC Comics are more your thing, you can support your favorite superhero at The Fwoosh.

Also this month, Modern Art Notes will determine America's Greatest Living Abstract Painter (number one seed is Ellsworth Kelly). The State Bar of Michigan will figure out the best city to practice law. (St. Louis is doing pretty well, so far!)  Carmex's tournament of lip balms is pathetically small, but on the bright side, the winner is chosen randomly through a drawing, so it doesn't matter how accurate your predictions are.

But the very best tournament of all may be Muppet Madness. Today, the greatest showdown of all time: Miss Piggy versus Fozzie Bear. 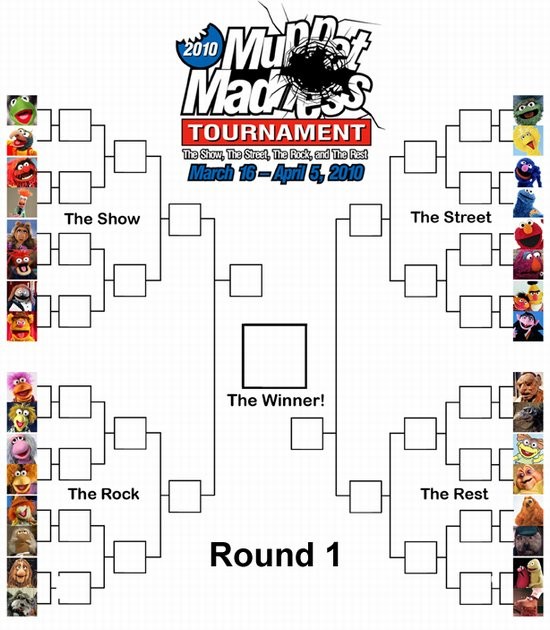