Tom Green, who hosted a show on MTV (criminally canceled), earned a solid spot on the B-List for celebrities and once dated Drew Barrymore (it ended badly, he says in his stand-up act), went for a dip in the swimming pool with his fans after his stand-up show on March 19 at the new Comedy Etc. II club inside the Ramada Inn in Fairview Heights, Illinois. Green was known to pull all manner of stunts on his show, and last week in Fairview was no different, judging from this video.

About 4:30 p.m. on Friday, he announced via Twitter that guests to that night's show should bring their bathing suits. According to some of the swimmers -- and shown here in the video -- Green ordered beers for all and something like an adult hotel birthday party commenced, with pool drinking, yelling and toasting. Let's hope the Ramada's suction-side pool cleaner was in good working order the next day. Below are a few photos for those of you who don't want to risk watching anything Tom Green-related while at work. 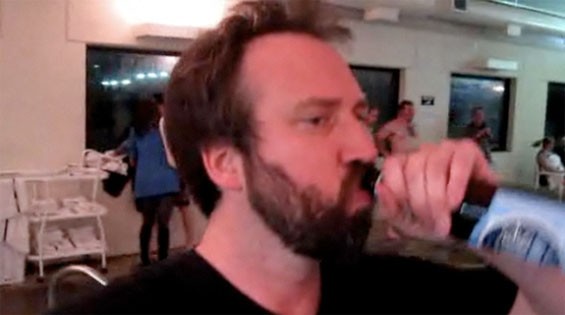 The first of he beers...

As well as toast