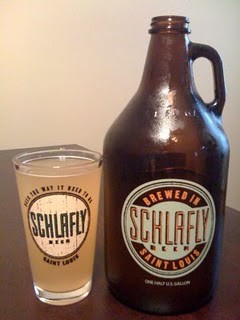 Updated Thurs. 3/25 with a few corrections.

Do you like beer? Do you like taking those 64-ounce bottles, a.k.a. "growlers", of beer home with you from brewpubs such as Schlafly?

Well, good news -- maybe. State Rep. Maria Chapelle-Nadal (D - University City) is sponsoring a bill that would allow you take home a growler (size 32 oz. and up) of beer from any bar or restaurant provided they serve at least 20 different draft beers and make half their revenue from food sales.

Turns out, only a couple restaurant qualified for the bill as written, one of which was Cicero's in the Loop.
Chapelle-Nadal's new bill was introduced back in January and has been read twice, but is not on any calendar for passage. It would lower the 45 tap requirement to just 20 varieties of beer.

For the history of growlers in Missouri and how you can persuade your state representative to approve Chapelle-Nadal's bill, visit our food blog, Gut Check.