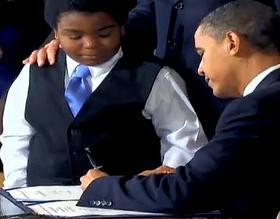 At a signing ceremony this afternoon Obama stated:

The bill now moves to the Senate, where Republicans have vowed to undermine the bill.


As Washington University law professor Cheryl Block tells CNN today, the bill must undergo at least 20 hours of debate in the Senate.

"It could get all messy and could go on forever if they threw up amendment after amendment," said Block. "Theoretically, it should only take 20 hours, but it will likely take longer because Republicans have things up their sleeve."