In the end, the Missouri Tigers just weren't quite good enough this year. I feel perfectly all right saying that, not as a slight, but as a fact.
The Mizzou basketball program has made remarkable strides in just a few short years since Mike Anderson took over as head coach; it should be a sign of just how far they've come that a simple tournament appearance for a program so recently relegated to also-ran status is no longer satisfying. No, the Tigers are no longer content to merely get to the dance floor, they expect to break out a foxtrot or two once they're there.
Now the Tigers' 2010 NCAA Tournament run has come to an end, much sooner than most would like at only two games. So what can we take away from this year's tourney?
So what went wrong exactly against the Mountaineers of West Virginia? Well, that's kind of a tough one to answer, because I'm not entirely sure something had to actually "go wrong" for the Tigers to lose. West Virginia is really, really, really good, and Mizzou was probably just a little out of its league. Then again, that's not a very satisfying answer, is it?
It really came down to two things the Tigers didn't do that West Virginia did. The Tigers didn't rebound well in the game yesterday, and they didn't shoot all that well in either game they played in the tournament. Against Clemson the Tigers didn't shoot particularly well but managed to overcome it with a few isolated bursts of good offensive output and an extreme pace. Against the potent Mountaineers' attack, the Tigers simply couldn't put enough points on the board.
What the Tigers did do relatively well was what they almost always do at least pretty well: defend. Mizzou pressured West Virginia all game and forced the Mountaineers' hand on more than one occasion; the only problem was even when their hand was forced, West Virginia generally had an inside straight working. (Wow, what a hackneyed metaphor. I'm almost ashamed to let that stand. Almost.) 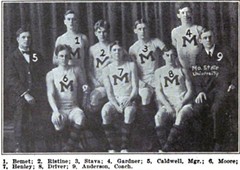 Really, the ways in which the Tigers fell short against West Virginia could serve as representative of the Tigers' deficiencies for pretty much the entire season. Even with shooting wunderkind Kim English and Michael Dixon aka The Freshman Flash, the Tigers are not a particularly efficient shooting team. They manage to post respectable point totals largely due to the number of turnovers the defense produces and the constant uptempo pace they maintain. Still, this is a team which needs at least one more consistent point-scoring threat before they should be seen as a true contender to go deep year in year out come tourney time.
The Tigers' rebounding woes against the Mountaineers should come as no surprise, either; Mizzou will certainly outwork, outhustle, and outtough any opponent they meet, but facts is facts, and facts is the Tigers are, on the whole, a bit undersized. Against West Virginia's superior height, Mizzou struggled to pull down rebounds most of the afternoon. The Tigers lack a true low-post presence, a player who can sit down in the paint and control space physically, and it showed in both the scoring and rebounding difficulties the Tigers experienced. Of course, that's also part of the style of basketball Mike Anderson teams play: it's tough to find a guy 6'7" or above who can run with the small forwards and guards so often employed in the Tigers' non-stop pressure attack. The Tigers do have a few, of course; Keith Ramsey and Laurence Bowers both fall into that category, but such players are a special breed and not easily replaced.
The Missouri Tigers of 2010 were by and large a successful bunch. They not only earned an NCAA berth in a bit of a transition year, but won one game and gave a top team all they wanted and more. This team should be proud of what they accomplished and hold their heads up high. They ran into a superior team on Sunday and it showed. They also played that superior team as tough as anyone could have, and that shows just how close the Tigers really are to elite status.