March 22, 2010 at 8:54 AM
comment
What do you do when you find yourself living in a new town where you don't know many people and you don't know what to do or where to go?

If your name is Brad Hogan you start a new social tool that lets you and others share local places and happenings around town and you call it UrbHub. 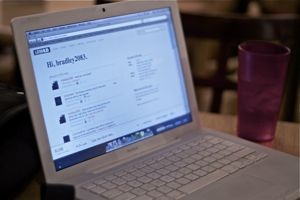 Urbhub isn't complicated. It's similar to other social sites where you drop status updates in text message sized chunks. But Urbhub is specifically designed to be a way to let others know -- be it your friends or not -- where the fun stuff is happening. It's a lot like Twitter only without the clutter of conversation, or Foursquare without the game, or Yelp without the reviews.
We met with Hogan at a local coffee shop to have him demo the site. When we logged into UrbHub initially, it seemed so simple we figured we must be missing something. But Hogan's demo proved the site was exactly as simple as our first glance suggested it was.

He's working on building out some other features like Google map integration and a better mobile site, but really it just boils down to what it is; a simple way to get a snapshot of what is happening right now. 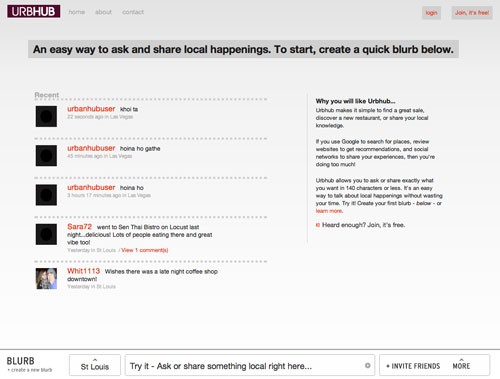 Currently the site is limited to St. Louis, Denver, Las Vegas and San Diego -- places chosen not for their unique demographics but because those are places where Hogan has family or knows people. St. Louis is the outlier where he doesn't know many people and the catalyst for the UrbHub idea. Hogan found himself living here last year when he moved to St. Louis to be with his girlfriend who is attending med school at Washington University.

In person Hogan is fairly unassuming. From our interview with him, you get the impression that he's a tinkerer. He likes playing with ideas and this is just one of many. If you play around with the site, you start to see the potential of what he's trying to do though it's still very much between the idea stage and being a fully realized site. Of course part of what makes a site or service like this really work is an enthusiastic user base that can give the developer ideas on how to improve on it and what features to build out yet. Hogan says he doesn't really have that big of a user base yet, and without any marketing budget he's relying on word of mouth to bring in traffic.

With all of the complex game/location/status/social media sites out there, UrbHub offers a simple alternative.