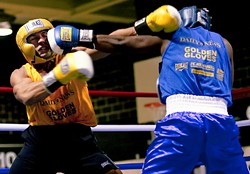 In January, as part of our preview of the novice division of St. Louis' Golden Gloves tournament, we wrote that the 110-year-old South Broadway Athletic Club was struggling to make ends meet.

Now, two months later, we can happily report that the Soulard institution is doing just fine. Don Cavesey, the president of the SBAC, says the club did very well on the hall rental and bar sales from the sold-out Golden Gloves in January and their income remains steady thanks to their popular Sunday-night bingo contests.

Cavesey says the rumblings about the the club's finances were precipitated by the SBAC boxing gym, which trains in an annex building a few blocks down the street, renting out their space to an MMA trainer. (For more info on St. Louis' city-wide transition from boxing to MMA, click here and read the sidebar to this week's RFT feature story.)

"The coach started talking about MMA and that kind of got confused with the club," Cavesey says, noting that the hall has also started to book MMA events. "We're doing okay. None of the businesses in St. Louis are doing too good right now."

Tonight and tomorrow the SBAC hosts the opening rounds of the open division of Golden Gloves.

The open division is for fighters with more than ten career fights or for champions of the novice division.