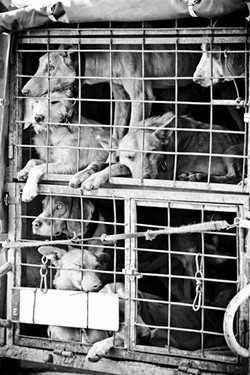 The Better Business Bureau is out with a scathing report on the dog-breeding industry in Missouri.

According to the BBB, Missouri is home to 30 percent of federally licensed dog breeders in the United States. That's four times the number of dog breeders found in the next highest state.

State law requires that all of Missouri's 1,800 dog-breeding facilities be examined once a year, but the state has only 13 inspectors who must juggle their inspections with other duties. As a result many of the breeders go unchecked.

A survey by the BBB suggests that Missouri officials must inspect twice as many kennels as their counterparts in other states.

The lack of oversight allows for haunting tales such as that of a mega-breeder in southwest Missouri said to buy and sell 90,000 puppies a year.

The breeder, Hunte Corp., is located in the small town of Goodman in the southwest corner of the state near the borders of Oklahoma and Arkansas.

Hunte, which delivers puppies to pet stores via 18-wheeler semis, has been the target of several suits filed by animal welfare activists and pet store owners alleging that the company delivered sick puppies.

The there's the example of the aptly named "Doo Little Kennel" near Rolla, where the BBB says federal inspectors found 103 violations during seven inspections in less than two years.

So what can be done to rein in the puppy mill industry in Missouri? The BBB makes the following recommendations: