The home of Charles Lee Thornton, a.k.a. "Cookie" Thornton, was seized today by creditors.

Thornton made national headlines two years ago this past February, when he went on a rampage, shooting and killing five people (a sixth victim would die months later) at Kirkwood's City Hall. Thornton was killed by police, bringing the total death toll to seven.

In 2003 Thornton took out a $93,000 loan on the home at 351 Attucks in the Meacham Park neighborhood of Kirkwood, a mortgage that his family could not pay.

According to reports, Thornton's 85-year-old mother, Annie Bell Thornton, still called the place home as recently as last month. Today her belongings are stacked at the curb, literally.

The morning after Thornton's rampage in February 2008, I visited the Thornton home, where I interviewed Annie, as well as Cookie's brother, Arthur. 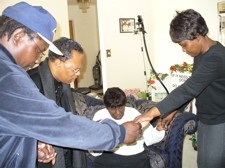 As you might expect, the two were still shell-shocked from the tragedy that had taken place the night before.

In the home's modest living room, decorated with photos of Cookie, his several siblings, his mother and brother remembered a loving man who felt he'd been pushed to the edge in a  battle with Kirkwood officials over zoning issues and fines levied against a construction business he ran out of his home.

"Last thing he told me before he walked out the door was, 'To God be the glory. I love you and see you later,'" his mother told me.

In the weeks and now years that followed Thornton's killing spree, much has been made about racial issues in Kirkwood and the city's interaction with the predominately black neighborhood of Meacham Park.

I won't pretend that I have a solution for that, but I do know this: It seems that Kirkwood officials could have stepped in and saved the family house. Such an action would have gone a long way to smooth relations, and for a relatively small price. Though it might be hard for some to swallow, Thornton's mother and siblings are perhaps the greatest victims of his senseless violence.

Spoke to Kirkwood Mayor Art McDonnell late this afternoon. He tells me that the city could not financially assist a homeowner to keep a house out of foreclosure. That said, he also said no one in the city ever brought up the topic.

"If churches or other organizations would have wanted to raise money to help the family keep the home, that would have been a nice gesture," says McDonnell. "I feel sorry for his mother and his family, Mr. Thornton took advantage of them. It's a sad story."