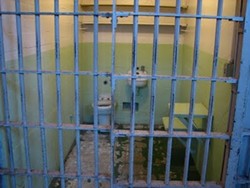 A 32-year-old woman was picked up by police around 2 p.m. yesterday. Within two hours Tabitha Williams would be pronounced dead, having hanged herself from a jail cell in the city's south St. Louis police station.

St. Louis police say that the Maplewood woman was picked up in the 5400 block of Southwest for outstanding bench warrants and transported to the South Patrol Area station. Around 3:00 p.m., a department employee saw the victim hanging from an article of clothing in the holding cell. Department employees immediately got the victim down and contacted EMS.

Williams was taken to a hospital where she was pronounced dead at 3:50 p.m. It was later determined that the name she had given to police was not her name but was instead the name of a relative.

Though it is unclear why Williams gave officers a different name, it could be because she had nine active bench warrants from five different courts (St. Louis, St. Louis County, Ferguson, Florissant and Maplewood) for charges of petty larceny, driving without a license, driving without insurance, failure to appear, stealing under $500, and assaulting a person.

Unfortunately for Williams, the relative whose name she used when initially identifying herself, turned out to also have outstanding bench warrants issued by the city court. Police say Williams was cooperative after being taken into custody and showed no signs of suicidal behavior.

A full autopsy will be conducted by the Medical Examiner. The investigation is being handled by the Homicide Division, which procedurally, handles any cases of an in-custody death. The results of their investigation will be forwarded to the Internal Affairs Division for review to determine if all department policies and procedures were followed.  Though the investigation is in its preliminary stages, the police say it appears at this point that procedures were followed.