March 17, 2010 at 2:00 PM
comment
Besides its wealth of political scandals and the appearance of its former governor on a TV reality show. Illinois has yet another reason to be proud of itself: Illinois State University in Bloomington-Normal is the home of Gamma Phi Circus, the nation's older collegiate circus. (There's only one other, at Florida State.) Yep: a real circus, with clowns and tightrope walkers and unicycle-riders and everything. 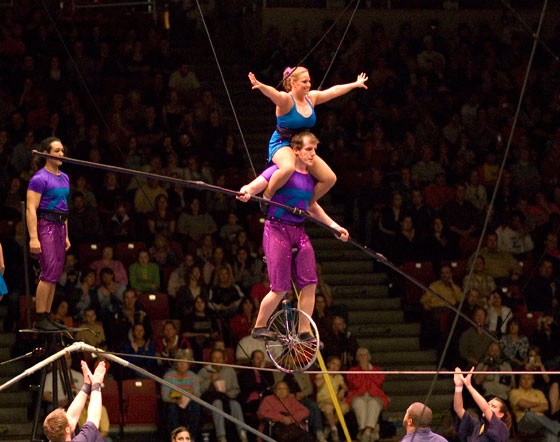 Gamma Phi will give a series of performances late next month under the big top of the ISU Redbird Arena before going on tour throughout Illinois.

But we are getting ahead of ourselves here. How is it that ISU came to have a circus in the first place?

Back in the 1920s, Bloomington, Illinois was the off-season home for circus performers. A curator of the circus collection at the university's library offers an explanation:


In the last quarter of the 19th century, a few talented young men left Bloomington, Illinois, to pursue careers performing aerial acts in the circus ring. At the end of each circus season, they would return to their hometown to practice. As artists, they developed their skills and perfected new tricks during these winter months. As businessmen, they sought new talent to expand their acts and offer more sensational performances. In time, Bloomington became the leading community for training performers for trapeze and other aerial acts.

Some gymnastics-loving ISU students started hanging out with the circus performers and picked up a few tricks, which they starting showing off at basketball games to raise school spirit. In 1929, they formed their own fraternity dedicated to physical education and gymnastics -- hence the name Gamma Phi. The group put on its first circus in 1931. Admission was 25 cents.

Within ten years, Gamma Phi had decided to drop the trappings of Greek-ness and let girls in. In 1947, the circus went on tour for the first time. The rest, as they say, is history.

The circus is still comprised entirely of Illinois State students who audition every fall. Some have even gone on to careers as circus performers. (Think of how thrilled their parents must be!) In the summer, Gamma Phi runs a circus camp for local kids.