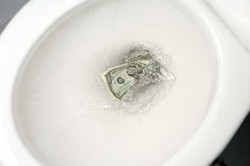 A budget bill making its way through Jefferson City could have a devastating impact on child care in Missouri.

Legislators in the Missouri House are looking to balance a projected $500-million budget gap for fiscal 2011. In so doing they've proposed trimming more than $7 million in child care for impoverished families in the state.

Problem is, the state's money is tied to federal stimulus grants. By cutting $7 million in state funds, Missouri will be forced to turn away turn away $38.7 million in stimulus cash for child care.

"The stimulus funds were appropriated on the condition that the state does not cut its own funding," says Carrie Shapton, director of advocacy for the Kansas City-based Partnership for Children. "With the state cuts and the loss of federal dollars, child care services for the poor could now lose more than $40 million in funding."

"Our point is that this is foolish," Shapton tells Daily RFT. "We're saving a little money and losing a lot of money that can help working parents keep their jobs."

Shapton says child care costs for one kid averages about $8,000 a year, and $11,000 for families with two children.

Scott Rowson, a spokesman for the Department of Social Services, confirms to Daily RFT that Missouri would lose the federal funds if the budget is approved with cuts to child care. He adds that 3,100 to 3,700 children could lose funding for child care.

The budget bill has hearings all week in the House. If passed to the Senate, Shapton says her agency and others continue their fight to stop the cuts. In the meantime, she's asking Missourians to send their legislators a letter such as this one.